So as many of you may be aware, I am originally from California. Now let me clarify, not all of California is beaches and sunshine all year round.

I am from the central valley where the summers get hot (105F!) and the winters are rainy. Moving to Canada brought me “Seasons” which I LOVE! I will be the first the dismiss the doubts that I wouldn’t like the snow. There is nothing better than waking up in my comfy and warm bed, throwing open the curtains and seeing a beautiful fluffy blanket of fresh snow covering every inch of our beautiful wooded landscape. Brings a smile to my face just thinking about it!

December 13th was a bit different… I woke to my cell phone ringing. Tim had left for work earlier that morning in our SUV after seeing the amount of snow we had gotten. Unfortunately he had only driven about 10 minutes of his commute when the wind swept in making it impossible to see. Like many others that day he wound up in a very shallow ditch. Thanks to a friendly nurse driving through when there was a brief clearing he was able to get to our nearby Tim Hortons. There he sat with 80+ other stranded motorists enjoying complimentary coffee and donuts for 7 hours! Visibility was less than 5 feet and the snow squalls were unreal! Fortunately his parents live only 2 miles away and when there was another brief break in the storm his father came riding in to save the day! Okay I am being a bit dramatic.

Really he drove in with his big John Deere tractor picked up Tim and they went back to the house. While all of this was happening I was sitting inside our toasty warm house with my two babies looking out at…. well… white! I couldn’t really see anything! There were times I could see our road about 200 feet away, but for the most part visibility was scarce.

News outlets described the chaos, “Howling winds, blowing snow strand hundreds of motorists near Sarnia”. Even my family in California could see what we were experiencing. The main highway, 402 was closed and the road my In-Laws live on was inundated with semi-trucks thinking they could get through only to be stranded as well. When the winds finally stopped military helicopters began rescuing the stranded motorists from their vehicles. Shelters in neighboring towns provided warmth and food for those people and snowmobiles went semi-truck to semi-truck offering their assistance to the drivers. I was stuck in our home with the babies for 2 days (missing our original flight to California) until Tim was able to hitch a ride on a snowmobile. With the help of some local farmers and their tractors they were able to clear out our side road to get us to the airport for our re-scheduled flight. It took 4 days to clear all of the mess on the roads!

Here are a few pictures of the calm after the storm! The snow afterwords was beautiful, but as you can see it caused a great deal of chaos. The pictures of the highway were taken from the overpass a quarter-mile from our home. 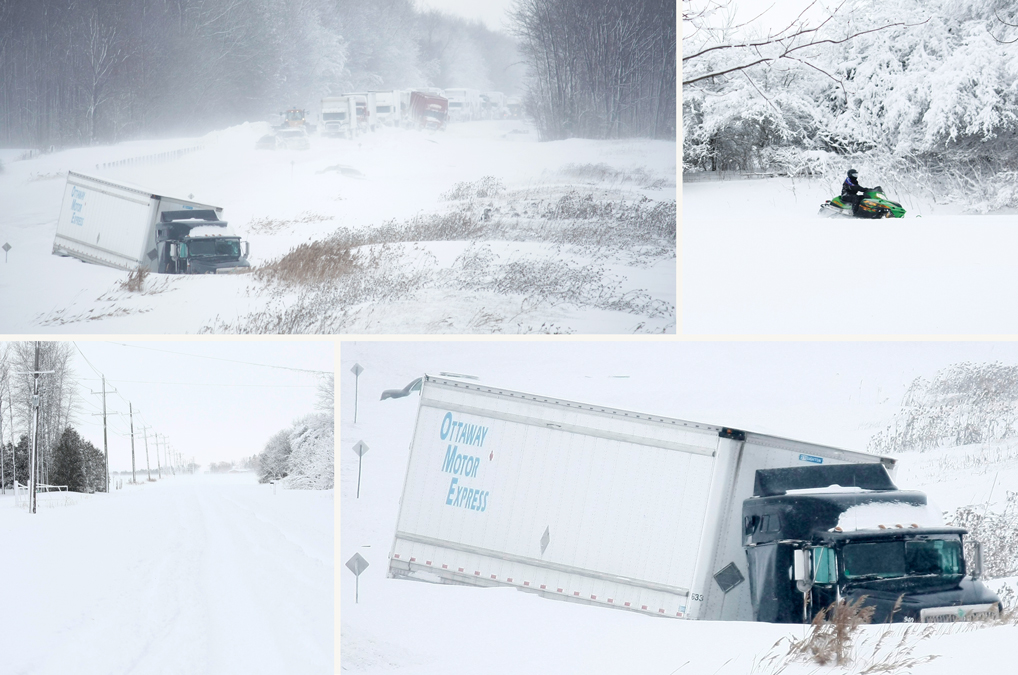 It’s the most wonderful time of the year! »

no comments
link to this post
email a friend